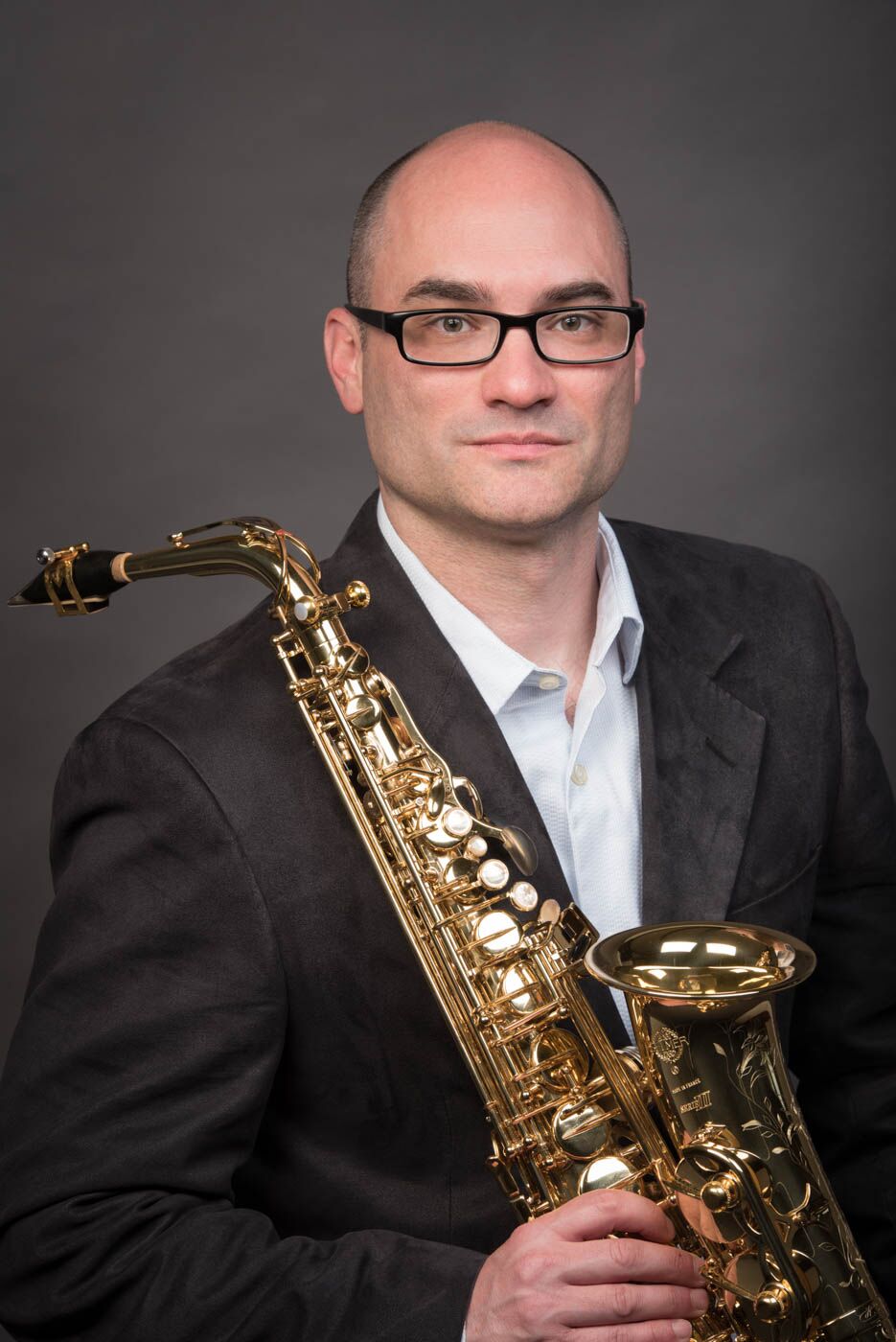 Saxophonist, Joshua Thomas has quietly built a robust career based in eastern Connecticut on
the foundations of high musical standards, a love of performance and education in a variety of
styles and settings, and engaging interaction with audiences.

Since winning a coveted position as a full-time musician in the United States Coast Guard
Band in 2000, he has performed hundreds of concerts around the world as a featured soloist,
chamber musician, and a member of large ensembles. Thomas has been entrusted with the
role of concerto soloist over 35 times on many high-profile concerts and tours with the USCG
Band, including a 2008 tour of Japan, at the 2007 Midwest International Band and Orchestra
Clinic, 2007 and 2017 Southwest tours, and several performances in the New England region.
As a member of the USCG Saxophone Quartet, Thomas routinely participates in recital series’
throughout New England. In 2010 the group toured Taiwan, performing at the Chaiyi Band
Festival, the 4th Taiwan Clinic, and were featured as soloists with the Taiwanese National
Ministry of Defense Symphonic Wind Orchestra. Domestically, the ensemble has performed
featured recitals at the 63rd and 72nd Midwest International Band and Orchestra Clinics, the
13th World Saxophone Congress, at multiple conferences of the North American Saxophone
Alliance, and completed a residency of performance, teaching, and recording at Brigham
Young University. The quartet has also performed on The Tonight Show with Jay Leno and on
WFMT Chicago’s program Impromptu.

Through his career in the military, Thomas has concertized at many of the country’s finest
concert halls, including Carnegie Hall, David Geffen Hall at the Lincoln Center for Performing
Arts, at Millennium Park in Chicago, and the National Gallery of Art, to more underserved
venues such as community centers, high school and middle school auditoriums in almost every
state, and the York Correctional Institution for women.

Away from the military, Thomas is quite active in performance and education. He routinely
gives recitals at artistic spaces, presenting standard works from the saxophone’s repertoire as
well as premiering new compositions. He has performed at numerous conferences of the North
American Saxophone Alliance, the Ammerman Center for Arts and Technology, the College
Band Directors National Association, and the Northwestern University New Music Conference,
as well as giving recitals at schools and colleges around the country. A proponent of new
music, Thomas has commissioned and premiered over 30 new works, from concertos, to
electro/acoustic and unaccompanied works, to chamber music. To date, his discography
consists of 14 recordings as a soloist, chamber musician, and member of large ensemble.
Thomas is a founding member of the Bassless Trio, a unique new chamber ensemble made up
of soprano voice, cello, and saxophone. The group made its debut in 2018, premiering six new
works written for them in both Connecticut and New York City. As a soloist, he has performed
concertos with the Western Connecticut State University Symphony Band, the University of
Georgia Symphony Band, the Hartt School of Music Wind Ensemble, the Indiana Purdue at Ft.
Wayne Symphony Band, the Noank Mystic Community Band (CT), and the Plano East Senior
High Wind Ensemble (TX).

As a jazz and commercial musician, Thomas spent a significant amount of time in his early
career learning the art of woodwind doubling. He won his first professional job while still in
college, serving in the Disney All-American College Orchestra, performing on saxophone,
clarinet, and flute. Even after his focus changed primarily to the concert saxophone, he
continued to perform in pit orchestras and commercial bands which led to performances at the
New Orleans Jazz Festival, the Austin Salsa Festival and bars in Louisiana, Michigan, Rhode
Island, and Connecticut. He continues to hone his chops playing alto saxophone in the USCG
Guardian’s Big Band and tenor saxophone in the New London Big Band.

Thomas has been fortunate to work with many outstanding musicians in a variety of settings.
He has played under the batons of preeminent conductors, including Leonard Slatkin, Mallory
Thompson, Frederick Fennell, Karel Husa, and Michael Haithcock. In the commercial and jazz
world, he has performed with Lou Marini, Doc Severinsen, Trombone Shorty, Sly Hampton,
B.B. King, Chris Vadala, Sara Bareilles, Chuck Mangione, and John Pizzarelli, among others.

Collapse player
Back to top